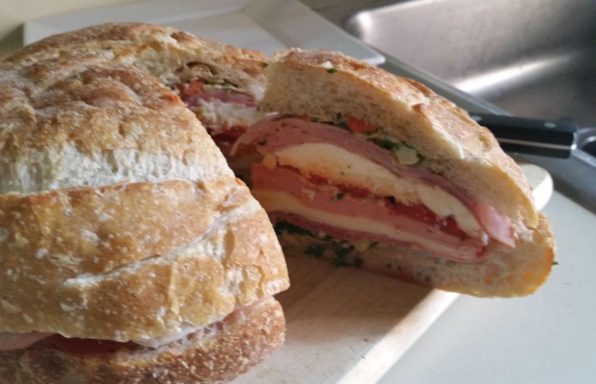 I believe I have three favorite all-time sandwiches: the Lobster Roll, the Reuben, and the Muffuletta!

I just like to even say the word “Muffuletta!” Its word is named for the type of round bread that is used to make this sandwich, a shape that may be akin to a mitten or a muff. The sandwich was created on the French Quarter of New Orleans for the Sicilian farmers. They would go to the Italian markets on the French Quarter and were sold hunks of meats, cheeses, olives, and a loaf of bread. Instead of trying to balance everything on their knees while trying to enjoy their lunch, it was suggested that they put all of the ingredients inside of the bread, and after some trial and error, they decided that the hollow round breads were the best, because they could stuff as much of the ingredients in and have it hold. Shortly afterwards, they were able to order these sandwiches as Muffulettas.

Muffulettas are most commonly made with an olive tapenade. I love it, and it is wonderful. Some Muffulettas are made with giardiniera, an Italian pickle mixture of red and green peppers, carrots, celery, cauliflower, and gherkins. It’s a wonderful mixture that sends me to the moon! For my sandwich, I pulse some giardiniera in the food processor until coarse, slice some green olives and a few drained artichoke hearts, and mix together in a bowl. It’s a delicious spread for a very special sandwich.

This recipe is for one sandwich (depending on how much you like to fill them), but my photos show me making two. I made one for the weekend for my son Frankie and me, and the other to take to a company pot-luck.

Cooking is more than a passion for me. It’s my life, and it always has been.